On 1st February 2020, President Emmanuel Macron wrote an open letter to the British people and announced that he intended to award the Légion d’Honneur to London in June 2020.

‘I would like to begin a new chapter between our two countries, based on the strength of our unrivalled ties. This year we will celebrate the 80th anniversary of General de Gaulle’s 18 June Appeal: the French know what they owe the British, who allowed our Republic to live.’

Shortly after, the world as we knew it was utterly transformed and we were soon quarantined in our homes and unable to visit each other’s countries. Whether the French President maintains his visit and fulfils his wish, and whether we’ll even be able to attend due to social distancing measures (1m in France, 2m in the UK!) is up in the air but … “c’est l’intention qui compte”.

As most people will know, the Légion d’Honneur is the highest French order of merit, both military and civil. This award can be bestowed not only on individuals, but on cities, institutions or companies. London would be joining several foreign cities, including Algiers (2004) and Brazzaville (2006), both of which have been honoured for helping La France Libre during the Second World War. 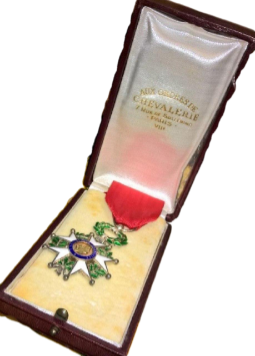 The 80th anniversary of the Appel du 18 juin is a very special occasion for us here at Alliance Française de Londres (thereafter The Alliance) and gives us an opportunity to look back at how our own history is entwined with that of the Free French as well as that of the Special Operations Executive, whose RF section was based at our own building, 1 Dorset Square.

On 18 June 2020, we’ll commemorate a day that came to mark the beginning of the French Resistance to occupation.

L’Appel is one of the events that unite French and British national memories and has become an iconic moment of British and French co-operation. It was contemporaneous with a project of Union between the two countries being considered at the time by both Winston Churchill and de Gaulle.

For us at the Alliance, L'Appel has a particular significance, since on 19th June 1940, the very next day, a delegation, including the Secretary General Yvonne Salmon answered the call and offered their support, among the very first people to do so.

This Alliance was the first organisation to rally and offer support to la France Libre, and General de Gaulle, in gratitude, became its Président d’honneur in 1941.

The Alliance Française in London and the Free French

There is substantial overlap between the Alliance and la France Libre. The former took part at its level in the same cause, supporting national salvation and contributing to Allied morale; the crossovers deserve to be brought to light.

One example is Secretary General Yvonne Salmon writing the second ever biography of General de Gaulle, published in 1943. She was an ardent admirer of the general, and one of his earliest supporters, and wrote this book for members of the Alliance as well as a more pedagogical edition for young British students wanting to find out more about the man himself. Her story will have to be told… 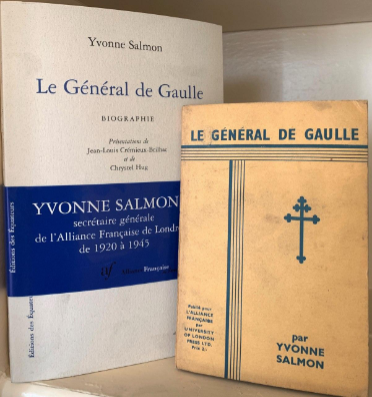 Yvonne Salmon’s book: 1943 and 2010 editions
(the latter with prefaces by Jean-Louis Crémieux-Brilhac and this author)

Lieutenant Jean-Louis Crémieux-Brilhac was secretary of the Free French Executive Committee of Propaganda from 1942, and simultaneously giving talks to French Circles around the country, under the auspices of the Alliance Française in London.

During 1943 and 1944 he was BBC liaison officer with the newly named Fighting French, a role which he shared with Gilberte Brossolette, wife of Pierre, an eminent visitor to our building. As part of this role, he spoke several times into the microphone of “Radio Londres”, for which he helped prepare programmes until August 1944.

When we showed the list of guests to an Allied reception organised by the Alliance in November 1942, Crémieux-Brilhac exclaimed: “Vous avez là tout le gratin de la France Libre!” And when shown a list of wartime members of the Alliance, Prof. M.R.D. Foot was struck by the fact that “they are at the top of the tree”! Let’s indulge here in a little name-dropping: Pierre Brossolette, Prof. René Cassin, Camille Paris, Capt. Hélène Terré, Capt. Léon Teyssot, Jacques Soustelle; Lord Bessborough, Viscount Jowitt The Lord Chancellor, Harold Nicolson, The Dowager Lady Swaythling, Lord Hankey and Lord Vansittart, the last two involved in the early days of SOE.

What a thrill it would have been to be in that room, mingling with the crème de la crème of the Free French! 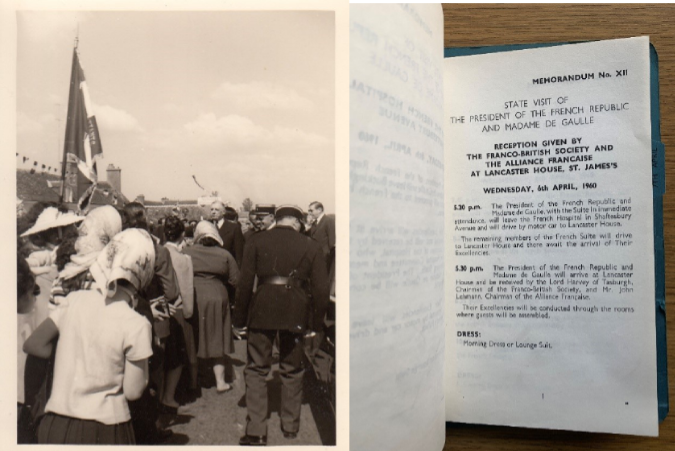 Post-war, in April 1960, President Charles de Gaulle and his wife toured hauts-lieux of the Resistance in the Loire Valley and also made a state visit to London. On 6th April, they attended a reception given by the Alliance and the Franco-British Society at Lancaster House in St. James’s. Earlier they had met with members of the Former Free French Association at Carlton Gardens, a gathering organised by Louis Burdet, former SOE agent (and regular visitor to Dorset Square – see our webpage devoted to him). 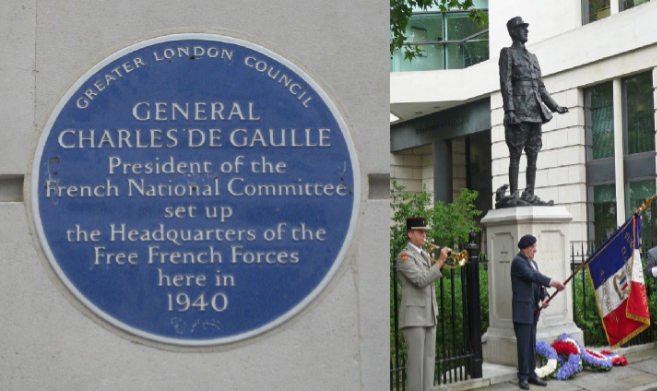 The blue plaque at 4 Carlton Gardens was unveiled in 1984 and the life-size statue in bronze of the General by English sculptor Angela Conner was unveiled on 23rd June 1993. Among the members of the Statue Appeal Trust were several prominent council members of the Alliance, who donated as well as raised money for the project.

The SOE at Alliance House

During the Second World War, our building at 1 Dorset Square housed the gaullist section of the Special Operations Executive (SOE, the British wartime secret operations services. Indeed, the resistance that began with individual acts of defiance grew into dedicated intelligence and resistance networks of the Free French and SOE - run from our building, the very place where our students come today to enjoy French classes.

Alliance House is the name we have given to 1 Dorset Square to honour the spirit of friendship and solidarity which inspired the British, their colleagues, their Free French friends and the résistants who visited and worked here for four dark but intense years during the Second World War.

Between 1941 and 1944 people did not come to Alliance House to learn French; they came to work hard at defending France, liberty and democratic values. They spoke French, smoked Gauloises, stuck drawing pins in maps of France and planned dangerous missions behind enemy lines.

In those days visitors to Alliance House were mainly French, exiled in London or exfiltrated from France. Very special agents, they came to put the finishing touches to their mission, collect their weapon, their cyanide capsule, rehearse their cover story and codes; or they came to be debriefed after returning from a mission. They were all patriots of immense courage and immoveable determination.

Whether decorated or not, their British colleagues were all praised for their loyalty and the conscientious way they applied themselves, for getting on particularly well with the French agents, for having collaborated with them constructively and decisively, for having done their utmost to support and promote Franco-British relations.

Indeed, Alliance House was the place where unbreakable and eternal links were forged between ‘inmates of the circus’ and clandestine visitors. Friendships were born, love stories blossomed; whole lives were marked by these experiences. They kept in touch, meeting up at commemorative events or for holidays. 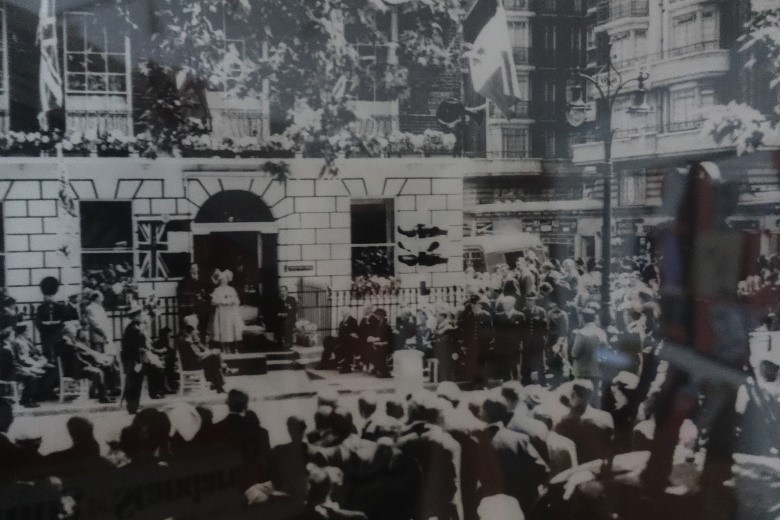 The unveiling of the plaque at 1 Dorset Square (detail)

The unveiling of the plaque on the wall of Alliance House by Queen Elizabeth the Queen Mother on 15th June 1957 was one of many occasions for old friends to see each other, but it was certainly the grandest. On that day they paid great homage to those amongst their wartime comrades who had not returned.

Today we pride ourselves in sharing the French language with you, our Londoner friends from around the world. We are not as courageous as those who used to work within these walls, but we strive to honour their memory.

Welcome to Alliance House where, by closing your eyes, you can imagine Jean Moulin, his scarf, his smile, in what is today the library; and Pierre Brossolette say to his friend Yeo-Thomas, perhaps while preparing their dangerous joint mission, ‘la vie est un cirque, il faut savoir en rire!’ 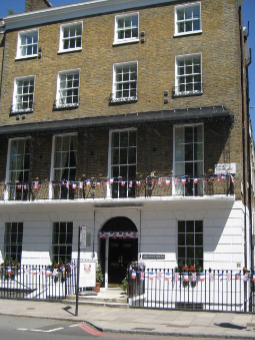