The Poppy Lady of France

The Alliance Française speaker who became “The Poppy Lady of France” 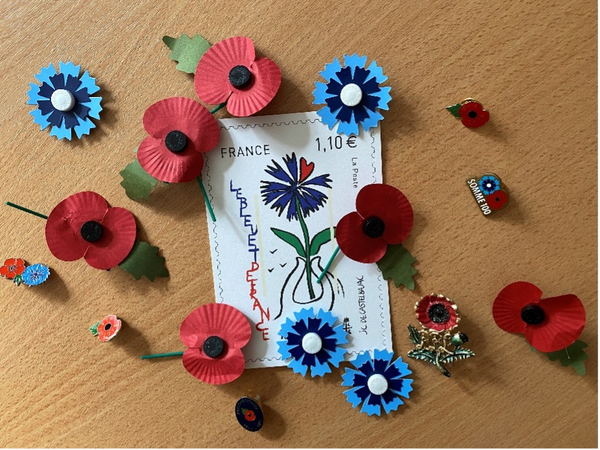 The poppy in many anglophone countries and the cornflower in France are the symbolic flowers of remembrance. But did you know – they both have a French origin!

If you have heard of “The Poppy Lady of France” you may know this was Frenchwoman Anna Guérin. There is a very informative and well-illustrated website devoted to her (link below), more complete than this webpage. Madame Guérin had been an Alliance Française speaker in Madagascar, Great-Britain and the USA before she began fund-raising during WWI and having Poppy Days.

Mme Guérin was in the UK between 1911 and 1914. She gave over a thousand lectures, as far as Belfast. She appeared in some 640 British schools and a few French Circles, notably the one in Ealing. The Ealing branch of the Alliance Française was then a very active French Circle, affiliated from the first to the Alliance Française UK and taking part in the meetings and speaking tours organised by the London bureau; this is why, proud of this association, we honour here the memory of Anna Guérin and her work

She used lantern slides to illustrate all her talks which sound more like performances, all given in French and in period costume. 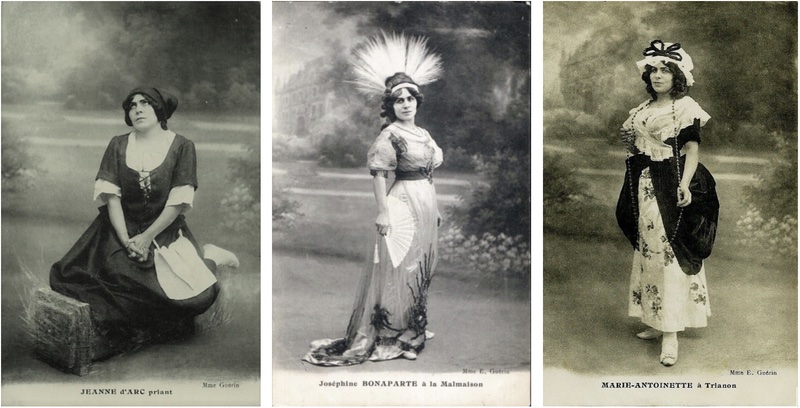 Her main topics were, after ‘Madagascar’ where she had lived and taught for several years, about several famous French women of history, e.g. Jeanne d’Arc, Marie Antoinette, Charlotte Corday, the wives and sisters of Napoleon Ier. She also spoke on Charlemagne, Bayard, La Fontaine.

For us here language teachers, what stands out in the reviews about her talks is constant mention of her clear enunciation and careful articulation, making her understandable to learners of all levels! An American newspaper quoted her in 1917 as saying:

“My aim is not to teach . . . it is to create enthusiasm among the students for their French lessons in showing them how well they can understand me.”

Her talks or rather dramatic presentations were praised thus:

“admirable in composition and diction”; “a speaker of beautiful prose, and speaks it with fine art”; “in the most exquisite French”; “delivered in such clear and easy French”; “her enunciation as clear, and her entire manner of delivery so exceptionally fine, that it was possible for those with even a moderate acquaintance with French to forget they were being addressed in a foreign language.” “The lecturer was quite remarkable for her clearness of enunciation and for [her] dramatic gestures”.

At the end of one of her last lectures in the UK, she said that “she had been greatly impressed with the extent to which a knowledge of French prevailed in the British Isles.” Long may it last or start again!

She left for the USA in October 1914 to lecture in schools, universities and Alliance Française chapters. With America not being in the war until 1917, she could not openly canvas for donations to help French victims of war but she would discreetly take any donations people were willing to give after her talk (for example to the families of fishermen in Brittany who had to go to war, to the orphans of France). When the USA entered the war, she openly lectured for French charities (like the Food for France Fund, the Red Cross) alongside of her Alliance Française lectures.

The poppy was first associated with the Great War of 1914-1918 in the poem of Canadian John McCrae, In Flanders Fields (written in 1915):

In Flanders Fields, the poppies blow,

Between the crosses, row on row

That mark our place; and in the sky

Scarce heard amid the guns below.

In November 1918, she was half-way across the Atlantic (returning to France because the Spanish ‘Flu Pandemic had cut her tour short), when the Armistice was signed. Her reputation had gone before her and she was asked to return to the USA to create an American branch of the Paris charity “La Ligue des enfants de France et d’Amérique”. Anna would form the American and French Children’s League in America.

Back in USA in March 1919, she organised a Committee in each state and members (francophiles and French expatriates) began fund raising for the Children’s League.

From September 1919, Anna began holding Poppy Days. These were very successful. As each State was organised, Poppy Days were arranged. In 1920, she had her “big idea”: It was the ‘Inter-Allied Poppy Day’. She addressed the American Legion in September 1920 – many Legion posts had asked for the poppy to be taken as a memorial emblem. The Legion committed its members to help Anna in her League’s nationwide Poppy Drive for Memorial Day in May 1921. Many had already been doing that, as it happens.

Anna went to Canada next and the Canadian veterans adopted her idea in July 1921. She went to Great Britain next. She sent her representative (Colonel Moffat, an ex-American Red Cross gent) to Australia, New Zealand and South Africa, to take her idea to them too. A sister and French friend, who were among those who helped Anna, were sent to Cuba. The “idea” was “that an artificial poppy bloom would serve as a remembrance emblem but financially assist those who made them” : French women and children would make the poppies – this would give them work and a wage, to help them reconstruct their lives after returning to their ruined homes. Even in 1921, France was still in ruins and returning refugees were still living in hovels, cellars and, if lucky, corrugated iron shacks. Veteran organisations would benefit from the profit made, after purchasing the poppies.

2021 is the centenary of the Poppy Day and it was Anna Guérin who put the poppy on lapels. On 11 November 2021, a square was named after her in Aubigny-sur-Nère, Cher 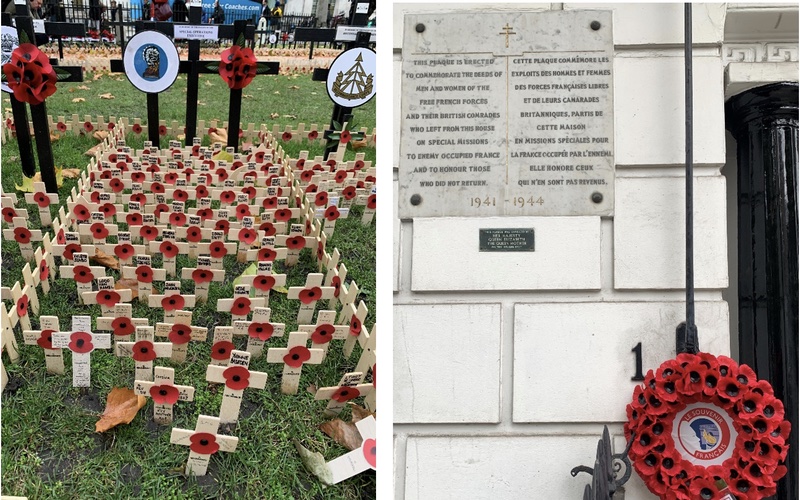 If you are connected with an association that offered talks of French interest in the years 1911-1914, could you please check your archives for any mention of Mme Guérin

If anybody is acquainted with the descendants of Mrs Vanderspar who was the Secretary of the Ealing AF in the 1910s, it would be great if her papers were still in existence. In February 1910 she was presented with an Alliance Française medal (her name might be engraved at the back) on the recommendation of the London bureau – has it been passed on to you?

If anybody has information and documents relative to the group called ‘Les Amis des Annales’ or “Cercle Français des Annales” in Edinburgh, Scotland, its President Monsieur Henri Meslier and the talks they presented at the Gartshore Hall, please get in touch.

Grateful thanks are due to Heather A. Johnson for her photos and help in putting this page together. 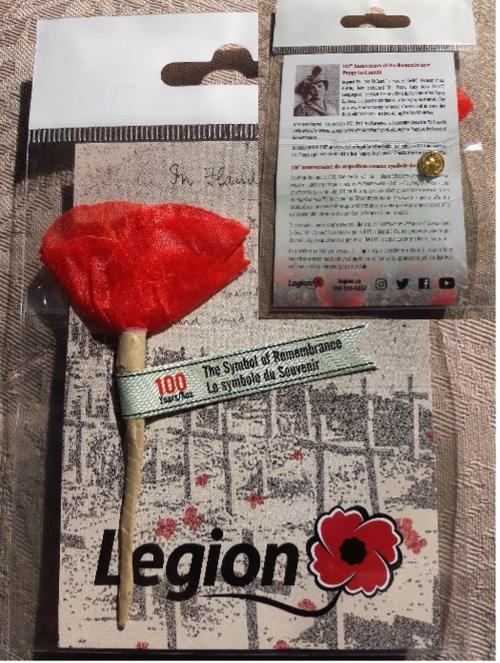