Alliance House is the name given to 1 Dorset Square by Alliance Française de Londres to commemorate nearly 30 years in an historic building, and to honour the spirit of friendship and solidarity which inspired the British, their colleagues, their Free French friends and the résistants who visited and worked here for four dark but intense years during the Second World War when the building housed a section of SOE, the secret special operations executive.

Between 1941 and 1944 people didn’t come to Alliance House to learn French; they came to work hard at defending France, liberty and democratic values. They spoke French, smoked Gauloises, stuck drawing pins in maps of France and planned dangerous missions behind enemy lines.

In those days visitors to Alliance House were mainly French, exiled in London or exfiltrated from France. Very special agents, they came to put the finishing touches to their mission, collect their weapon, their cyanide capsule, rehearse their cover story and codes; or they came to be debriefed after returning from a mission. They were all patriots of immense courage and immoveable determination.

The men and women who worked at Alliance House were between 20 and 50 years old and came from many different backgrounds. They were British, from England, Scotland, Canada, New Zealand; some with roots or links in South Africa, Jamaica, Turkey, Portugal, Poland. Several had French mothers or had been born in France. In 1943 American colleagues joined them. They could all speak French, and for a while spoke to each other only in French, so as to be prepared if they too needed to be parachuted onto French soil to take part in her liberation. Some had already seen combat, having fought in the First World War or been deployed to France with the British Expeditionary Force; others had taken part in special missions before being posted to Alliance House. One had lost a leg, another an eye. It was difficult for them to be satisfied planning missions without wanting to volunteer themselves. This is what Yeo-Thomas and some others did, putting their lives in danger, with breathtaking courage and determination.

Whether decorated or not, all were praised for their loyalty and the conscientious way they applied themselves, for getting on particularly well with their French colleagues, for having collaborated with them constructively and decisively, for having done their utmost to support and promote Franco-British relations.

Indeed, Alliance House was the place where unbreakable and eternal links were forged between ‘inmates of the circus’ and clandestine visitors. Friendships were born, love stories blossomed; whole lives were marked by these experiences. Returning to peacetime and civilian life, our Dorset Square ‘eccentrics’ took to their new lives with enthusiasm: French and English teachers, writers, a philosopher, a banker, a corporate lawyer, businessmen, gallery owners, politicians, diplomats; a few continued to defend their country’s interests undercover. Some based themselves in London, in Paris, or in the provinces, others went to Portugal, Costa Rica, South Africa, Australia, Sardinia. On the French side, Dorset Square’s former visitors moved in the highest echelons of public life, involved in rebuilding the country, resuming their previous career, starting out in business in France or in the colonies. Some kept part or all of their wartime cover names.

They kept in touch, meeting up at commemorative events or for holidays, sending their children to learn French or English with each other. A chain of camaraderie established itself across borders, the strongest links being Yeo-Thomas in Paris, and Burdet and Whitehead in London. They passed on any news, unscrambled this time. 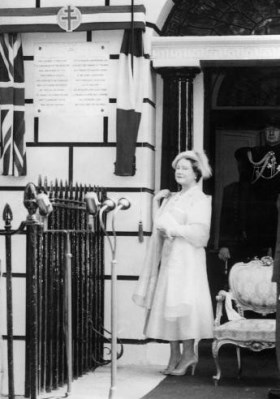 The inauguration ceremony for the plaque on the wall of Alliance House was one out of many occasions for old friends to see each other, but it was certainly the most grand. And that day they paid great homage to those amongst their wartime comrades who had not returned.

The Alliance Française de Londres took part in the same cause, supporting national salvation and contributing to Allied morale, and the crossovers deserve to be brought to light.

Today we strive to share the French language with you, our Londoner friends from around the world. We are not as courageous as those who used to work within these walls, but we strive to honour their memory.

We hope you will enjoy practising your French in the old offices of SOE’s RF Section, ‘another kind of circus’.

Welcome to Alliance House where, by closing your eyes, you can imagine Jean Moulin, his scarf, his smile, in what is today the library; and Pierre Brossolette say to his friend Yeo-Thomas, perhaps while preparing their dangerous joint mission, ‘la vie est un cirque, il faut savoir en rire!’

Note: This is an edited extract of the forthcoming RF is for Real Friends, research enlivened with testimonies and unpublished texts. You are welcome to quote any of the above and it will be appreciated if you would kindly acknowledge this research and include a link to this page.